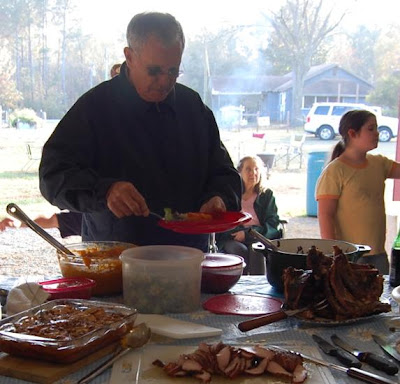 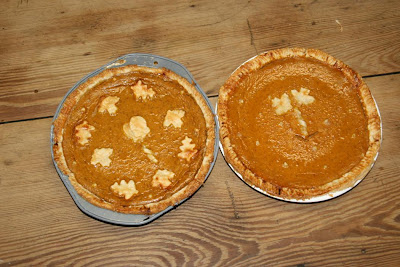 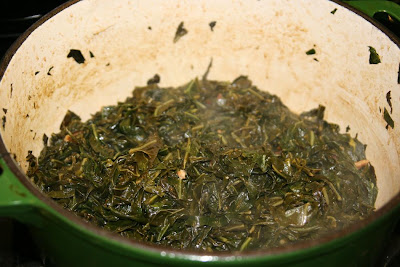 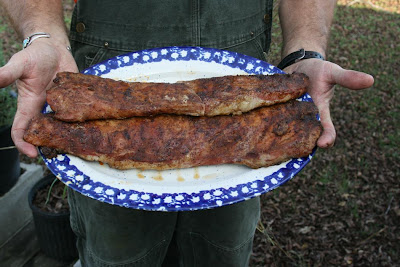 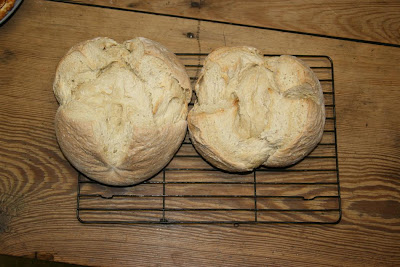 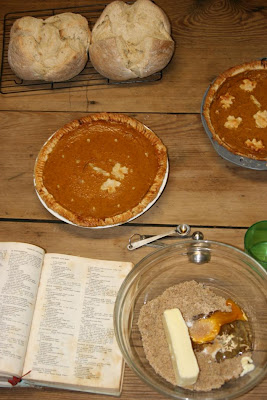 So awesome!!!!! Thanks to all who came, brought food and enjoyed!
Posted by Mrs. McGhee at 1:18 PM No comments:

Putting American Guinea Hog Back on the Table 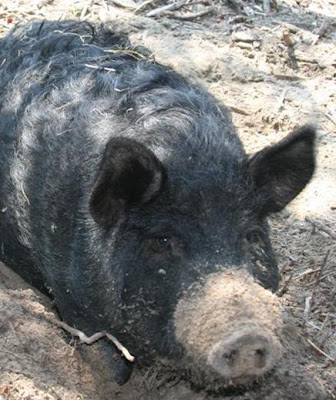 Rare breed heritage farm animals are a valuable genetic resource, and, to maintain this resource, the animals must remain a part of the food chain. I know it sounds weird, but if these animals aren't valued as a food source, they will go extinct. We raise American Guinea Hogs (a small heritage breed hog) to help preserve the breed, put excellent meat on our own table, and eventually to sell to the general public. This Thanksgiving we ate our first Guinea Hog - a 1-year old female feeder that we obtained from a fellow breeder.

Processing a hog takes a good part of a day. We started at 7am and were done with the majority of the work and clean up around 2pm. We ground breakfast sausage and stuffed bratwurst the next day, and we'll be smoking our bacon next week. 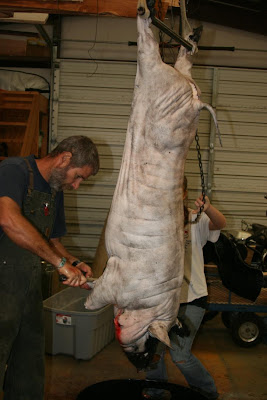 The following is a breakdown of how we process a hog at Bluefield Acres, and, if you click below, you'll also find a slideshow of the slaughtering and butchering we did on Wednesday. The pictures aren't for everyone, so proceed with caution. The slideshow starts with the scalding.

Processing a Hog - CLICK FOR SLIDESHOW
Isolate hog and do not feed for 24 hours
Shoot hog in head with .22 LR
Cut and bleed the jugular
Scald hog in water at 150 degrees until hair pulls out easily
Scrape hair until skin is clean
Wash carcass
Gut hog
Remove head and feet
Butcher into desired pieces of meat

We got approximately 50 pounds of boneless meat off our Guinea Hog - tenderloins, loins, 3 small roasts, fatback, bacon, sausage and bratwurst. Plenty of meat to fill a small family freezer. Below are the ribs. We ate them on Thanksgiving, and they were the best ribs I've ever had by far. 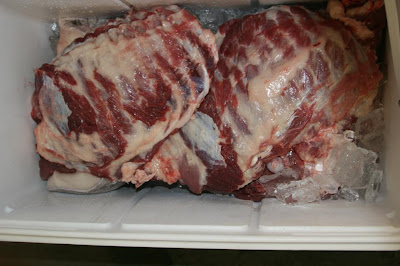 Things that we learned
1. Guinea Hogs get enough salt by foraging that the meat doesn't need to be salted as much as other pork.
2. Due to their free range diet, Guinea Hog meat is much redder than standard pork and more flavorful.
3. Lard from free range Guinea Hogs won't solidify easily. This is because it is low in saturated fat - grain fed meat is high in saturated fat, forage fed meat has very little. We had to freeze the lard Scott rendered to firm it up.
4. Biscuits made from pork lard are yummy. The biscuit on the left was made with lard and the one on the right was made with butter. The biscuits may not look different (and both are delicious), but the lard biscuit had a lovely bacon flavor all by itself. The sausage in the picture is ours, and it was absolutely wonderful! Guinea hog sausage has a strong meaty flavor that we found fantastic. 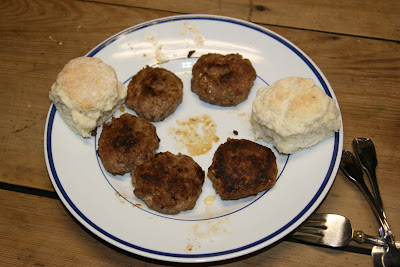 For a full description of our Thanksgiving meal, check out our next post.

And Then There Were Three

Five piglets were born in early August. All were healthy at birth, although one was a runt. Now there are three.

American Guinea Hogs are incredibly easy to raise. Feed them a little bit every day so they'll come when called. Give them a bit of pasture or woodlands to forage in, and they'll take care of the rest. No antibiotics, no worming treatments, no worries.

At 8 weeks, we weaned our piglets from their mother. They turned 12 weeks old this weekend, and we were planning to castrate the males on Sunday morning - something that is best done when they are young. We woke to find 5 sickly piglets in the pen Sunday morning, and decided to put the castration business on hold.

We usually give the pigs (adult and juveniles) slops from our table, but we'd been gone the previous weekend, and I'd gotten out of the habit. It had been a week since I'd doled out slops, and the food at the bottom of the bucket was pretty ripe. I didn't give it much thought though as I've watched our adult Guinea Hogs eat a week old rotten snake and thoroughly enjoy it.

I dished out the leftovers on Saturday around 11am, and the baby pigs ended up with the oldest slops because I fed them last. By Sunday morning two babies were extremely sick (vomiting and staggering) and the rest were lethargic and showed little interest in food. It hit me that the slops may have been somewhat fermented, and we wondered if the piglets were just drunk. Unfortunately, that wasn't the case. By 1pm the largest male was dead and our big female looked horrible - really bloated, very uncomfortable and exhausted. We crated "Easter" and took her to the house to keep an eye on her. Scott autopsied the pig male and found a healthy, but very gaseous pig - no worms or parasites at all, but the piglets innerds had a strange odor and his bladder was very full.

A little internet research gave us our answer - foodbourne botulism. It attacks the nervous system (thus the staggering) and eventually shuts down the respritory system leading to death. It also shuts down the bladder's ability to void, leads to constipation and gas. "Easter" lasted a good 12 hours longer than her brother which allowed us to watch the botulism progress. If she stood up, she staggered, and she stood very little. She threw up once (and it smelled horrible), but in 12 hours she never voided her bladder (although she did drink) and only had one minor bowel movement. She never had a fever and just seemed to fade out slowly. She died around 1am in the morning.

At first light we checked to make sure the remaining three little pigs were okay. All ran out of the pen and proceeded to pee like mad - a very good sign. All were very hungry too. The adult pigs that are penned next door (and got some of the same slops) never showed any signs of illness, so my guess is that they were never exposed to the botulism. Although the three smallest piglets were obviously exposed, they must have injested much less of the toxin. I guess being at the bottom of the pecking order isn't always a bad thing.

We are bummed today, but are taking the lesson learned to heart - fresh slops only from now on.