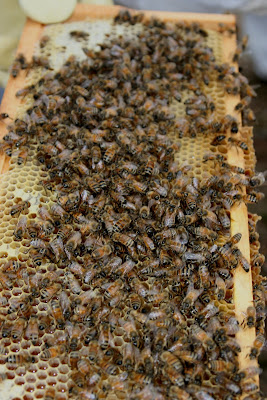 We are planning to add bees to the farm in late April or early May to enhance pollination and produce honey. I signed up for a 5-night class on beekeeping to learn the basics, and yesterday evening (around 6pm) we cracked into the campus hive and got hands-on with the bees for the first time. This is what I learned.

First, you should wear these funny little suits, hats and gloves to avoid being stung. 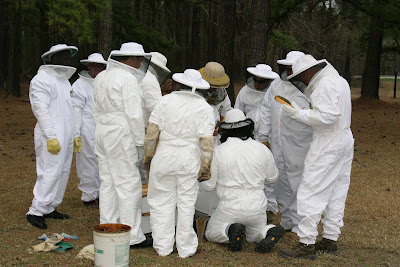 Second, you need to smoke the hive before entering to calm the bees. Italian honey bees are relatively gentle, but any bee can become agitated for a variety of reasons. Bees don't like dark colors (note all the white), don't like perfumes and dislike cold or cloudy weather. We were careful to enter the hive on a warm day just before dark as bees are calmer later in the day. 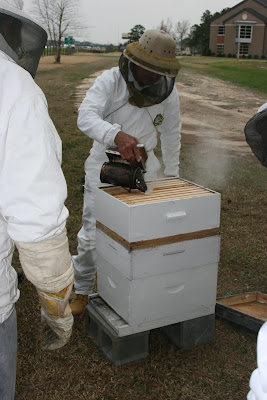 The multicolored stuff in the left corner is pollen and the shiny open cells have honey in them. Pollen and honey are both used as bee food. The white stuff is actually larva that will transform into pupa by eating royal jelly, pollen and honey. After 5 days of being fed bee food, they are sealed in and become capped brood (growing worker bees). 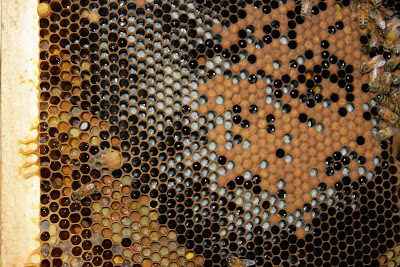 The next picture shows drones and drone cells. Drones are males. The hive produces a lot of these guys in the spring, but by fall they will be kicked out or killed by female worker bees. Drones have one function - to mate with the queen - so their work is done early in the season. Drones can't feed themselves and are a liability during the winter. Worker bees (all female) live for approximately 42 days and literally work themselves to death. 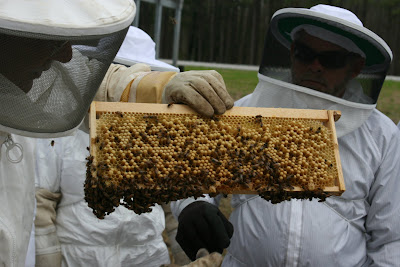 Propolis is a glue that bees make from tree resins. They use it to seal up and strengthen their hive and it must be scraped off periodically by the beekeeper to maintain hive access. Here you can see where the bees have been gluing the inner cover to a hive super (supers go on top of a hive body and give the bees a place to store honey). 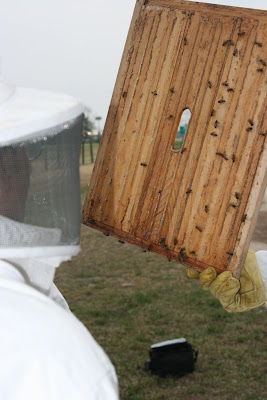 We looked and looked, but never found an active queen. Although we did see some queen cells. If new queens are allowed to hatch in the hive, they will split the colony and swarm to another area. 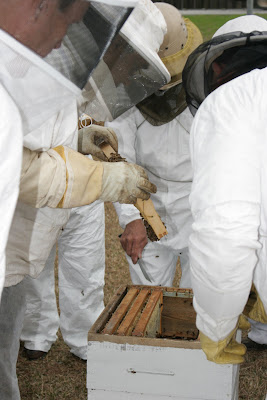 Queen cells look like peanut shells. See lower middle. These were destroyed to prevent a swarm. Queens do nothing but lay eggs and can lay eggs for 5 years off a single period of mating. 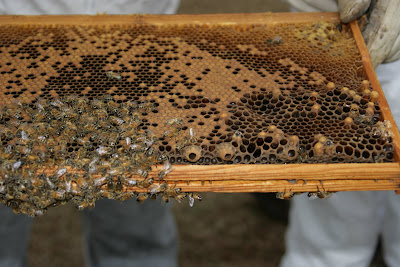 I was stung once on my glove, but wasn't hurt at all. By and large the bees were curious, but not aggressive. There were about 20,000 bees inside this hive which was composed of a brood box and two supers - about standard in size. If you took the honey from this hive you would get about 5 gallons a season.

Can't wait for next week. I just hope I'm done with this nasty cold by then. You can't imagine how unpleasant it is sneezing in a bee veil.

We spent two days at the Lake Waccamaw Southern Farm Days Festival this weekend showcasing Scott's talent as a blacksmith and bladesmith. Grandma Peggy attended as well to demonstrate old time hearth cooking and the kids, Papa and I came along to help out. All the money raised by the event went to the Lake Waccamaw Home for Boys and Girls. Here are some of the highlights.

Scott and Jacob firing up our coal fired forge (circa 1800's) with a newly added chimney to keep the vendors and guests from drowning in smoke and soot. 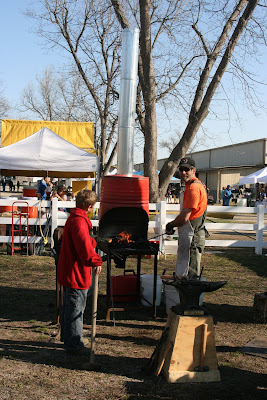 Grandma Peggy and Bonnie kept us well-fed over the weekend. They cooked up some homegrown grits and sausage on Saturday morning, then chicken and dumplings and bread pudding Saturday afternoon. On Sunday, they kept the crowds happy with beef stew and apple dumplings. 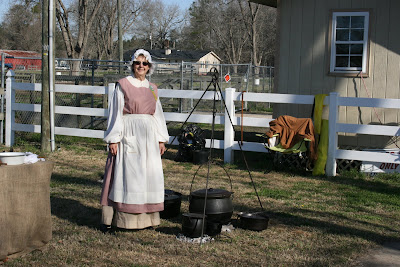 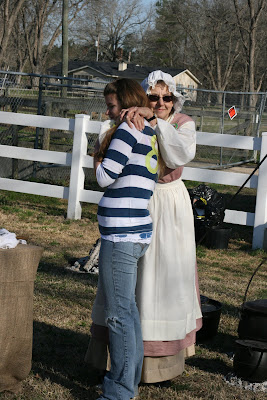 Jackie, the master of the bullwhip and a member of a local horseman's association, kept the crowds entertained. 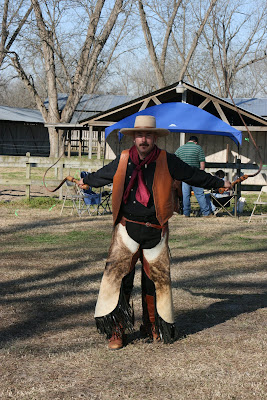 Brian, the festival's farrier, took a turn cranking our Buffalo Forge Blower on Sunday while enjoying a cone of homemade butter pecan ice cream. Jackie came over to watch too as Scott knocked out a tribal knife that Papa dubbed "The Waccamaw". 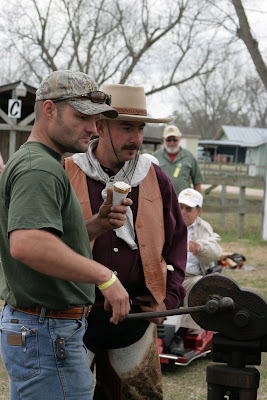 Check out Guinea Hog Forge to see how "The Waccamaw" was made out of an old tool file. 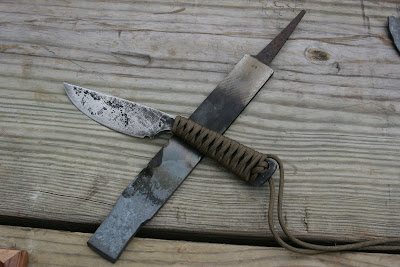 On Saturday, Scott wowed the crowds by hacking through a 2x4 with one of his latest custom knives, then shaving with it to show how well his blades hold an edge. 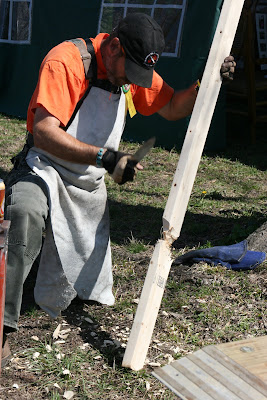 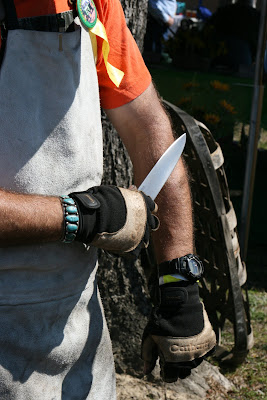 We had a blast and plan to come back next year! Hope to see you there.
Posted by Mrs. McGhee at 7:52 AM No comments:

Scott decided to try his hand at making old time cat head biscuits - really big biscuits the size of a cat's head. He used his tried and true recipe (which is posted further down on this blog) and simply made them bigger. Twenty-two minutes in the oven and they were done. These were quite tasty, but difficult to finish in one sitting! 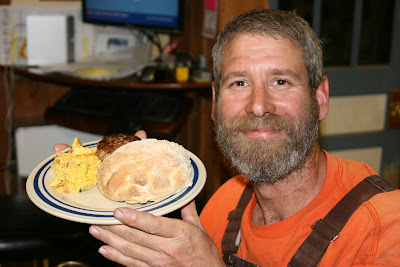 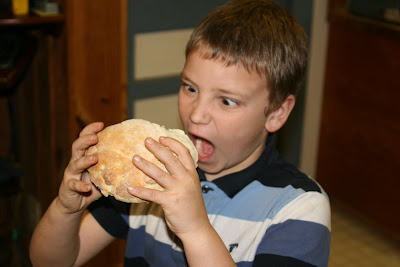 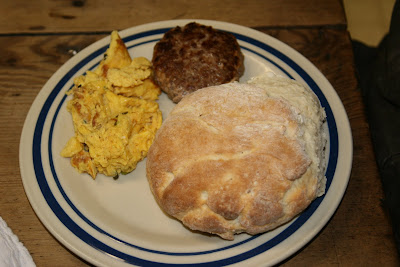 Home made Guinea Hog sausage and home grown eggs rounded out the meal, and the biscuit was made with our own GH lard. Yummmmm!
Posted by Mrs. McGhee at 8:04 AM No comments: