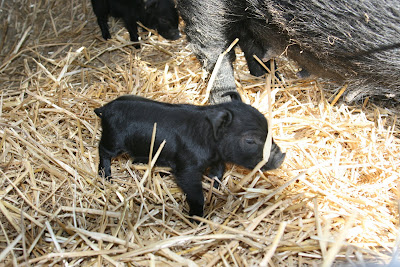 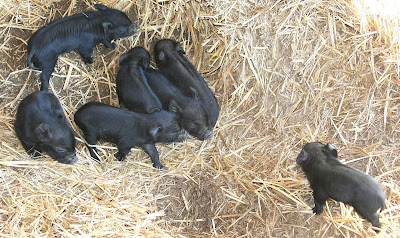 Bo Diddley knocked up Scarlet a few months ago, and we've been anxiously awaiting the birth of our first litter of registered American Guinea Hogs ever since. Last night at about 11pm Scott heard some interesting noises coming from Scarlet's pen, but we were too tired to investigate and fell into bed wondering what might await us the next day. First thing this morning I headed out to the farrowing pen and was thrilled to find five adorable baby pigs burrowed in the hay. I hollered the news to Scott and hurried off to get Scarlet her breakfast.

I stopped by Bo's pen to let him know that he was a new daddy, but he was more interested in breakfast than piglets. 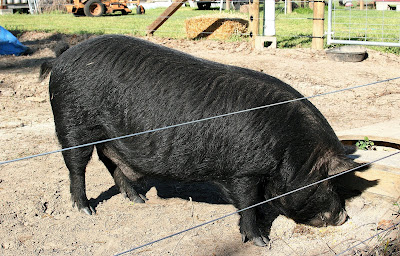 When I got back to Scarlet I was in for a surprise. Scott informed me that we had six piglets, not five. Apparently one of the babies had been knocked out of the farrowing pen and was wandering around by himself in the larger pen. Luckily the three teenage pigs that live in that area hadn't bothered the little guy, but he was very tired and didn't squeal when Scott picked him up - not a good sign. We took him to mama and tried to get him to nurse, but it didn't look good. He kept wandering off and no matter how many times we put him on a teet, he didn't seem to know what to do with it. After about 30 minutes we gave up and decided to let nature take its course. He would either figure it out or he wouldn't. 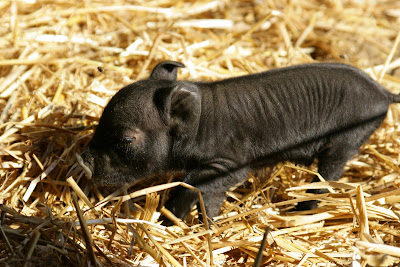 Later in the afternoon while moving our picnic table, we heard a strange noise in the woods. It sounded like a puppy....or maybe even a baby pig. We took off in search of the noise and...low and behold...a baby Guinea Hog came stumbling out of the pine forest. It appeared that #6 had broken loose again, so I scooped him up, chided him softly and took him back to mama. He was covered in pollen and looked a bit "green", but if this was #6, he was actually looking much spunkier than previously and squealed readily when scooped up.

Upon returning to the farrowing pen I realized that #6 had not gotten loose after all. This was number 7 - "Lucky #7" that is. This little guy had been out of the farrowing pen since early in the morning, if not before. What are the odds that he could survive on his own that long and be found by his owners? He seemed quite fine and immediately went to work fighting for a place at the milk bar. I looked around to see if I could find "Pitiful #6", but he was no longer discernible. He had apparently learned how to run the tap at the bar himself and was feeling mo' better. 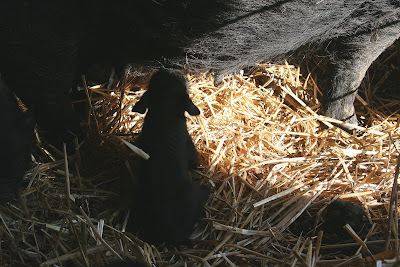 So, if you are looking for an American Guinea Hog to add to your farm, shoot us an email -bluefieldacres@gmail.com - we've got quite a few. We haven't actually sexed the kids yet and 6/7 may in fact be girls. We'll post an update on that soon. We're just trying to keep them corralled in the pen and well-fed for the moment. They should be good to go by the 21st of May - one week before our wedding. Man, do we know how to plan or what!!! 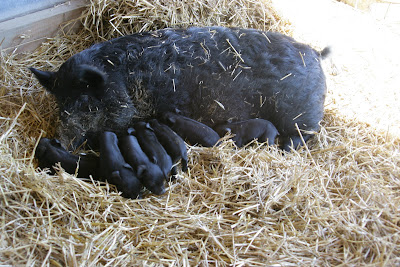