Why would a southerner lock his car with the windows up in July while parked in a known safe location such as the church parking lot?

To keep friends and neighbors from filling the car with squash! 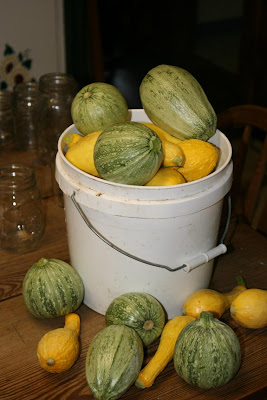 Our garden is exploding with squash and zucchini and the tomatoes aren't far behind. We expanded the garden this year and decided to try some new varieties including round zucchini, open pollinating corn and heirloom tomatoes. Our favorite tomato so far is Radiator Charlie's Mortgage Lifter. Our preference is based solely on the name as we haven't eaten any of them yet (just one more week to go!). Scott grew all our tomatoes from seed this year, and they're all heirloom varieties - Mortgage Lifter, Red Pear, Yellow Pear, Cherokee Purple, Katinka Cherry, Indian Stripe, Principe Borghese and Romas. Good thing Scott likes canning! 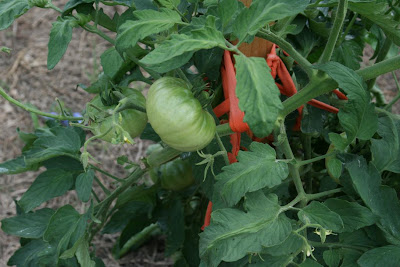 Our Silver Queen corn is doing fabulous as is our Wapsi Valley, a open pollinating variety given to us by a friend. The Silver Queen is hard to beat for good eats, but the Wapsi is absolutely georgous. The kernels can be either red or yellow, are quite large and should grind into excellent grits and corn meal. 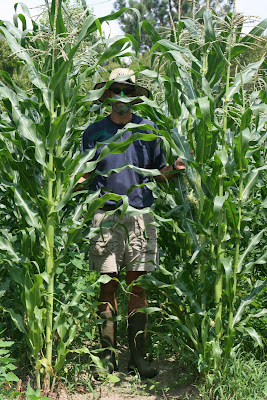 Due to heavy rain our potatoes didn't make it, and due to a bumper crop of rabbits our beans, peas and peanuts are struggling. We have an electric fence around the garden to keep the deer and pigs out, but the long-eared rodents have bypassed it with no problem. They've had a field day in our garden, and even tried to establish a nest in the carrot patch! Check out that Cosmic Purple carrot on the left - it's orange on the inside and tastes wonderful. 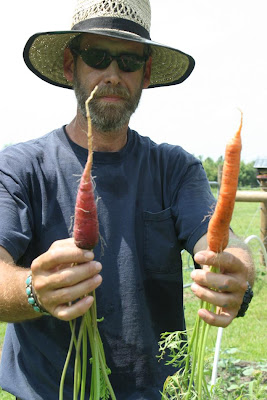 We harvested an exceptional crop of Vidalia onions and Russian Garlic this summer, and our asparagus and hot peppers are looking great too. Earlier this spring, however, we had a bit of a garden tragedy and I figured now was as good a time as any to describe what happened.

It was around 10am in the morning and Scott was calling for help in the garden. Not just help weeding (which I pretend not the hear), but "help!". I could see that he was squatting over something and working on it at a feverish pace.
We have netting over our strawberry plants to keep rodents from enjoying the fruits of our labor. The prior evening the wind had blown the netting into a pile, and I remember telling Scott that we needed to straighten it and stake it down. 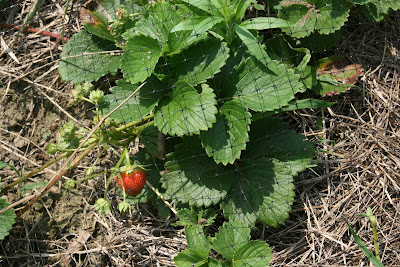 Needless to say, we forgot, and now the netting was in a tangled mess at Scott's feet along with two large snakes that were trapped inside. One was alive, the other...not so much. With my assistance Scott freed the larger snake (a male?). He didn't look very good, but he did slither away after being freed. Then we detangled the smaller (female?) snake and threw her over the fence to see what the pigs whould make of it.

Okay, okay, I know it sounds a little gross, but American Guinea Hogs are supposed to be ruthless varmit killers and we wanted to see their reaction. It was amazing. Their little snouts started working overtime as they slowly approched the dead reptile. Then, once within about 6 inches, they'd squeal and run away. So much for being killers! 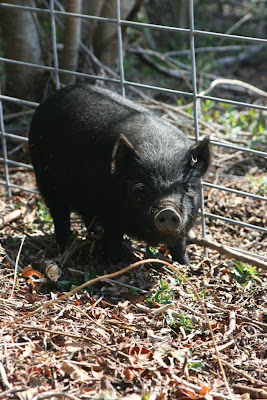 Ahhh, but time heals all wounds...so to speak. Or maybe it's simply that hunger will make us do things we might not otherwise do. Everybody knows the "Alive" story about the soccer players in the plane crash over the Andes. Well, our pigs aren't cannibals, but by 5pm they were very hungry and that snake must have started looking and smelling good because Magnolia was walking along with a large mustache dragging the ground on either side of her. Crunching sounds and sister Scarlet were only seconds away. Bo avoided the fray initially....I do need to keep a check on how much feed he's getting... but he eventually gave into the feeding frenzy. 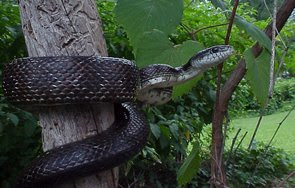 We were really bummed to lose the snake....well, potentially many snakes. The male will hopefully make it, but our theory is that the snakes were in a mating ball when they unfortunately discovered the netting and got tangled. A bummer of a way to go (I guess) and a shameful loss of some really good rodent hunters. We later identified the reptiles as Rat Snakes, and they were probably protecting our strawberry crop from field mice. Oh well, it was an excellent opportuity to watch the pigs get a little primal, so we'll take the good with the bad and try to be more careful with the netting in the future.
Posted by Mrs. McGhee at 5:19 PM