As expected, without roosters our hens stopped coming home to the coop at night and started roosting in the woods. I never really gave the name "rooster" much thought, but it's pretty clear that they have an important job to fill on a free range chicken farm - they tell the hens where to roost and without them it is fowl chaos. Crowing and spurring aside, a rooster's value on our farm has gone up expotentially. 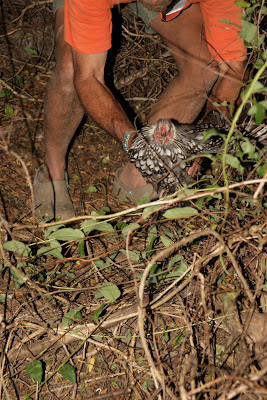 In order to reclaim our hens, Scott and I made two evening forays into the woods to capture the missing birds. Scott read somewhere that once a hen has fallen asleep, it is easy to pluck them off their roost. Sure enough, this was correct. On the first night Scott walked right up to two hens, snatched them from the shrubs they were roosting in (at about waist level) and took them back to the coop.

We weren't able to locate two of the missing hens (4 of our 8 were easily chased back into the coop), so the next evening Scott watched carefully to see where the jailbirds planned to roost. One choose a rather high spot in a tree, and the other (who'd been badly injured by one of our roosters) actually choose a pile of sticks near the ground. We went after the injured bird first and captured her easily. After applying a bit of neosporin to the side of her face (where the rooster had pecked her unmercifully) we stuck her in the coop and went off after the chicken in the tree. She proved to be too sly for us. She was so high that I had to pull a limb down to get Scott close enough to touch her and that wasn't close enough. She eventually woke up, flew off and obsconded as we tried to figure out a way to get to her. No worries though, the next morning I found her snooping around the coop, opened the door just a bit and she went right in. I guess two nights in the woods alone were quite enough. 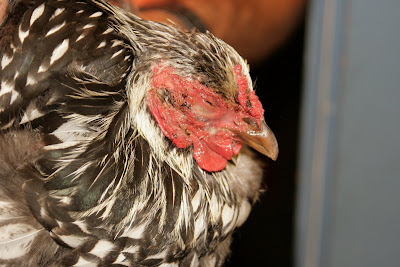 All eight surviving hens are now miserable, but alive in our coop. It is obvious that they very much want to free range and have retaliated by reducing egg production by more than half. We used to get an egg or so per chicken, per day. Yesterday Scott only found 3 eggs and that was two days worth.

So now we are thinking chicken tractor. We never understood why so many free range chicken farmers had these. Our hens free ranged, roosted at home and gave us plenty of eggs without a mobile chicken house, but now we understand. Without a rooster around, a chicken tractor is the only way to let hens free range without the worry that they'll be eaten by predators or go feral in the woods. We'll let you know how it goes.