Jock-a-doodle-do, the Chickies, and the Art of Castration

So we haven't made the chicken tractor yet because we found a better solution for the wild hen issue. Meet Jock-a-doodle-do. 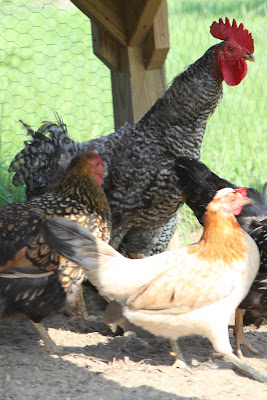 Jock is a young Dominique rooster that was residing at a friends farm. Jock had been dropped off by someone who didn't want a rooster, and he'd been accepted until he decided to attack one of the owners prize gamecocks. Luckily we stopped by the day after the fight and suddenly were offered a free rooster to handle our wayward hens.

We weren't sure if adding a new rooster to the flock would work, but Jock has done an amazing job of keeping the hens in line and so far has roosted them in the hen house every night for the past two weeks. I think we'll keep him:)

In addition to this success, our Partridge Rock chicks arrived about a week ago. We are raising them in the shop and so far they are doing quite well. 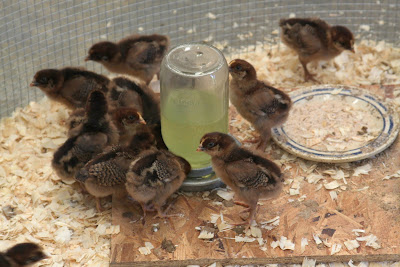 We still plan to build the chicken tractor, as this will be the new chicks first outdoor home. If we put them in the coop with the big chickens, they'd get picked on, and, if we let them run loose before full grown, the local hawks would pick them off. We'll post pictures of the chicken tractor once it is up and running.

Lastly, we castrated our baby pigs last weekend. I've always said, "Our hogs only have one bad day in their lives." I must now recant that statement and note that some males have two bad days. Scott did a show-cut on the boys which doesn't leave visible scarring, but we think in the future we'll go with a scrotum cut which should be easier on the boys.

It was a bad day for me too as I was very worried for my little boars (they seemed to be in quite a bit of pain afterwards), but by the next day they were up, running and begging for food just like normal so I hope they will forgive me soon. We waited a bit too late (7 weeks) to make the cuts and in the future we will castrate them earlier (at 2-4 weeks).
Posted by Mrs. McGhee at 8:38 PM