A Tale of Two Roosters 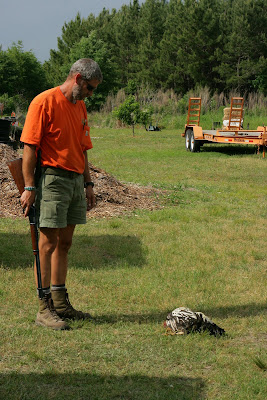 We had two roosters. Now we have none.

Life on a farm can be fun. It can also be really unpleasant. When we first got our Wyandotte chickens, we culled down to two roosters and waited to see who would reign supreme. The smaller of the two (Spot) appeared to be the better provider and protector, but Dinner (we were supposed to eat him) was far prettier and had a better crow. Well, we got complacent and decided that having two roosters was fine. They fought a little, but eventually worked out a deal - Spot got 7 hens, Dinner got 4 - and they basically shared the same space without too much commotion....until this spring.

Once the weather got warmer, rooster testosterone levels went haywire. One evening Scott and I watched Spot and Dinner fight for about an hour. It was more of a dance than a fight though. Each rooster would fluff its neck feathers, charge, then jump over or under the other. No blood was drawn (even though they both have large, sharp spurs) and it was kinda pretty.

Well, as time went on the fights got more serious and blood was eventually shed - sometimes in copious quantities. We decided that one of them had to go, and Spot made the culling decision easy. Spot had always been aggressive toward us and the kids, but for the most part he'd been all charge and no spur. His bloody attacks on Dinner, however, made us rethink the possibilities, and (with an outdoor wedding coming up on the property) we decided Spot simply had to go. As Ruby said in Cold Mountain, "I hate a flogg'in rooster. Let's put him in a pot."

This, however, may have been a mistake.

At first things were sooo much better. No more peaking around the corner to see if Spot was waiting to charge. No more displays of fowl aggression on mankind. Everything seemed so peaceful...until we noticed that some of the hens looked rather abused.

Apparently a few days after realizing that he was now supreme chicken, Dinner decided that it was time for Spot's girls to be his girls. They however declined to submit... so he got nasty. Yesterday I noticed a hen that looked really beat up, but she wouldn't let me get close enough to check her out. Then, later in the afternoon, I went in the coop to check for eggs and was amazed at the mess - feathers were everywhere. I opened one laying box and half the eggs were smashed, then I checked another and...uh oh...there was a dead body inside! I called Scott in to perform a detailed investigation. His diagnosis - Dinner had spurred the hen in the back until he had splayed her open - a brutal murder. We found two other hens that were injured in a similar manner, though still alive.

Scott got the .22 and took care of Dinner. Seemed like the thing to do at the time, but in hindsight, this too may have been a bad idea.

A good rooster will call the hens in at night, find food for them and alert them to danger. Last night the girls were still out after dark and the two injured ones never came in the coop at all. We hope the girls will come out of it, but 24 hours later they still seem a bit lost. I think they became dependent on the guys and may be easy pickings for predators without a rooster around. A good rooster is obviously a valuable thing.

Scott called a friend who raises chickens and found out that rehabilitation might have been a possibility for Dinner. In the future he said to put the attacking rooster in a box (aka prison) for a few days, cut his spurs, let him out after a brief incarceration and see what happens. Apparently this occasionally fixes the aggression issue, but the success rate is low (hmm, that sounds about right), and we'll never know whether it would have worked on Dinner or not.

The good news is that we have new chickens on the way and we're a little smarter now. June 1 we should receive some Partridge Rocks. We hope they will be good layers and will go broody at some point as well. The Wyandottes have shown no interest in being mothers, and we'd like to have some bitties of our own someday. We'll also cull down to one rooster as soon as possible. Two was one too many. 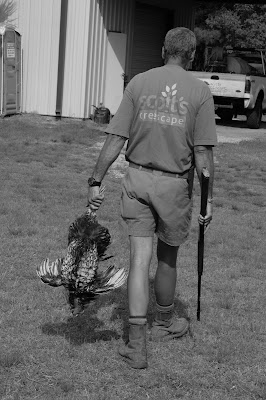