From Pasture to Table

Where does our food come from? What type of life did it lead? What was it fed? Was it given antibiotics? Was it happy? These are some of the questions that led Scott and I to start Bluefield Acres - a homestead farm in Bladen County, NC. We want to eat meat that's free of unwanted chemicals, preservatives and medications; food that's led a happy, stress-free life prior to providing us with valued nutrition. 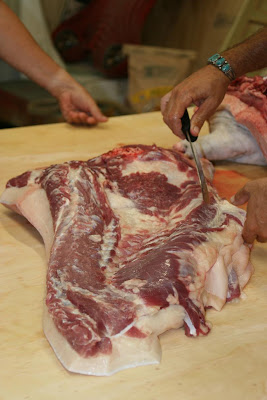 Today we slaughtered and butchered our first guinea hog, which is why I'm thinking about this out loud. The hog wasn't one that we'd raised, but one raised by a colleague and friend. The boar was about a year old and led an idyllic life on a beautiful farm in Chatham County prior to becoming food. He was raised on pasture and alfalfa and spent his days roaming a 14-acre farm . 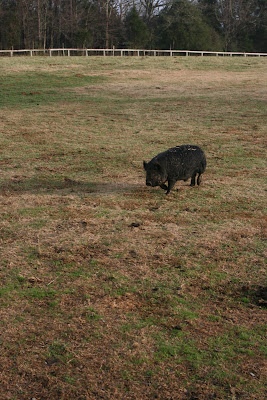 Taking a life is not an easy thing, but hogs are food and this one was slated as a feeder pig from birth. He never knew what happened. Life just ended while enjoying a treat of cracked corn, then the process of slaughter and butching began. He only had one bad second in a happy life.

We started the day early (6:30am) as the forecast called for temperatures in the 90's and high humidity. Not ideal conditions for the task at hand. After the boar was killed and bled, we scalded it in a large tub to loosen the hair for removal. The scalding water must be at 150 degrees and you only scald the hog until the back and jowl hair comes out freely. Scald it too long and the hair will set; too short and the hair won't come out. We left it in the water for about 1 minute and used our tractor to dip and remove the carcass. 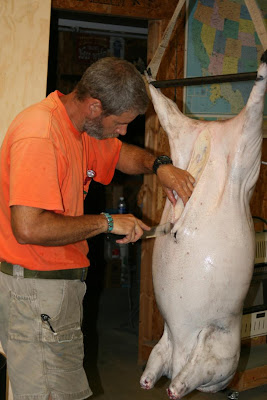 7:30 am - Scott broke the hog into primal cuts that we put immediately onto ice then brought back out to further process after chilled. We used a cloroxed sheet of plywood and plastic cutting boards as our work surface. Fatback and random pieces were saved for making sausage; hams and shoulders were cut into small roasts; loins, tenderloins, ribs and bacon were cut out separately; select sections of fat were saved for rendering and neckbones were saved as well. We were done with butchering by 10:00 am, then cleaned up and retired to the house to process the sausage. 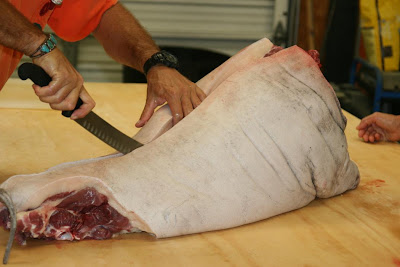 American Guinea Hogs are small in comparison to commercial hogs. Commercial hogs are grown quickly in confinement and slaughtered at 6 months when they weigh around 300 pounds. AGH's are grown slowly on pasture and at slaughter we estimate that this one-year-old boar was around 150 lbs. By growing American Guinea Hogs slowly on pasture as opposed to grain, you get a richer tasting meat that is higher in nutritional value than commercial pork. By knowing where the hog came from, we were assured that it was raised humanely and without unwanted additives. 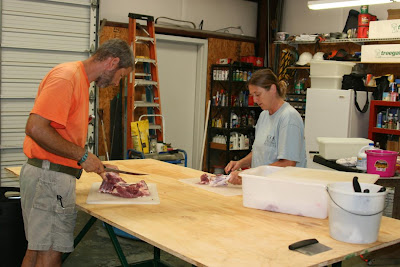 I worried that looking my food in the eye before processing it might be a problem, but in truth it wasn't. I am truly thankful for what this boar will provide in the way of meat and know it led a good life worth celebrating.

There's a movie that's just been released call Food Inc. - http://www.foodincmovie.com/. It's asks a lot of questions about where our food comes from, how it's handled, and what the food industry doesn't want us to know. I haven't seen it yet, but plan to see it soon. America has become extremely efficient at producing cheap food, which has its positives, but unfortunately it has its costs as well. What's your food worth?